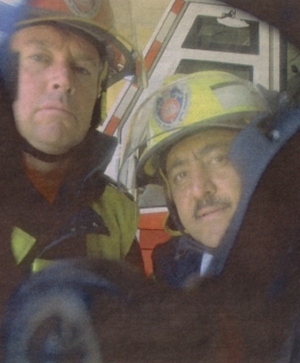 A DEADLY Campsie unit fire has claimed a third life.

Sung Goo Son, 34 died in Concord Hospital on Thursday night from burns he suffered in the September 4 blaze which ripped through the ground-floor unit of his family’s Unara St home.

Two-year-old Sa Rang Son was found dead inside the unit immediately after the fire.

The family’s mother and eight year-old son are still in hospital in a serious condition.

The cause of the fire is still being investigated.

The blaze has caused Canterbury Council and Campsie Fire Brigade to call for increased fire awareness throughout the community.

On Wednesday, officers from the local brigade opened their doors to about 30 public housing tenants from Campsie, Belmore, Wiley Park and Punchbowl to educate people on fire prevention.

The tenants rallied with the assistance of the Central Sydney South Regional Tenant Resource Service, who provide information and guidance to public housing residents.

The initiative also aims to break down cultural barriers between government services and citizens from different cultures as part of the Arabic Communities Participation Project, which is funded by the Community Relations Commission.

Campsie Fire Station Commander Peter Levett said for people who have recently emigrated from other countries, communication between local authorities and residents on matters of public awareness may be uncommon, and the NSW Fire Brigade was there to help.

“The scheme, is a very important step towards breaking down barriers and a way to get more fire awareness into homes,” he said.

“It may be the kind of thing some of these residents are not used to, but we are using the opportunity to let them know we are here to help.”

Fire prevention as well as fire fighting was a big part of the job of the NSW Fire Brigade, he said.

Canterbury Councillor Karl Saleh, who has been heavily involved in helping educate the Arabic community in the area said the project was an important step towards preventing devastating house fires.