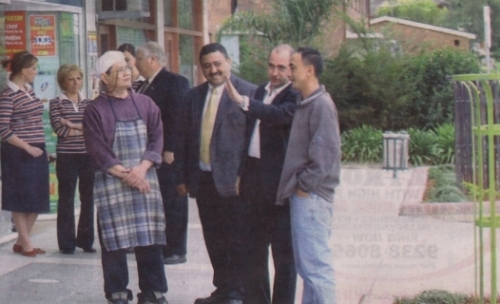 Narwee has had a long awaited facelift.

The bandages have come off and the verdict is one that has Canterbury Mayor Robert Furolo grinning.

The latest stage of improvements to Narwee’s Penshurst Road has officially been completed by Canterbury City Council, replacing the tired old asphalt pavement with the updated look of concrete pavers.

As part of council’s 15-year Infrastructure Renewal Program, centres such as Narwee, Hurlstone Park, Croydon Park and Lakemba are all in line for a share in a $45 million makeover.

“Over the past couple of years, we’ve been doing more and more to make Narwee look great,” said Mayor Furolo.

“I’ve spoken with locat shopkeepers and residents who are very happy with the work Council has been doing. These works will help give Narwee a lift, and make it a more vibrant, and successful shopping centre.

“These works demonstrate our commitment to supporting local business, shoppers, and local residents to ensure our city continues to thrive and prosper.”

Mayor Furolo added that the program, funded through a special levy on rates, ultimately helped Council to bring forward major upgrades that would have otherwise take years to complete.

Narwee newsagency owner Li Yen said the upgrade had noticably improved the look of the shopping area for customers, and was pleased particularly with the decision to move rubbish bins further up the street.

“It’s much better than before,” she said.

“A lot of rubbish was left there on the weekends and the smell was bad.”

“They don’t empty the bins everyday, and summer’s coming so I was very happy to see the rubbish bins have been moved.”

Ms Yen said her business had been consulted for ideas in the lead-up to the renovations.

She said she forward to Council a suggestion from customers to install two small steps in the newsagency’s doorway.

Campsie is also included on the program’s upgrade list, with an estimated $800,000 budget for the work which is scheduled to start in early 2006.