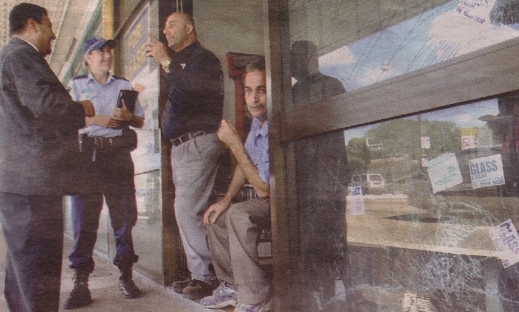 Police and Canterbury City Council are working together to help business people in Wiley Park tackle crime and safety in the troubled suburb.

After a rough start to the year when businesses in the area were repeatedly targeted by robbers the police believe the situation has calmed.

Shopkeepers in the area said on Monday that crime was still a serious issue, but that they were positive and optimistic about the work of the police and the council.

The council has acted by developing a Wiley Park Shopping Centre Action Plan with Campsie Police to address security concerns and reduce crime.

The shopping centre action plan advises shop keepers to remove advertising from windows to increase visibility from the street and installation of no money kept on premises signs.

“I encourage them to participate and have a voice on the council’s Town Centre Development Committee,” Cr Saleh said. “Successful community safety is based on partnership, which means everyone has a role to play.”

Campsie police, which through crime prevention officer Bethany Hawker has also conducted security inspections at all the businesses in Wiley Park, advises business people to use security cameras, put locks on back doors and office doors, put barriers or gates on counter entrances and to display signs in their windows informing passers by about the measures.

Constable Hawker said most of the businesses in the area have been victims of robbery, but the area has quietened down since the start of the year.

“Campsie police have arrested a number of high risk offenders during operations across the command,” constable Hawker said. “The council have been fantastic, I have attended the council’s community safety committee meetings.

Businessman Benjamin Moussa said that the area has been quieter in recent weeks, but that if the council and police upgrade the area with more lights and security measures then improvements are bound to follow.

“We have had more police in the area since the pub and the newsagents were broken into at the beginning of the year,” Mr Moussa said.